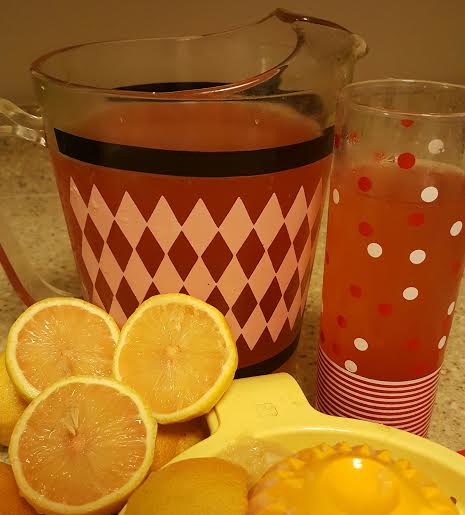 Among the myths of mankind, we have yet to discover the Holy Grail, and a live alien, but pink lemons can be found at Trader Joe’s. 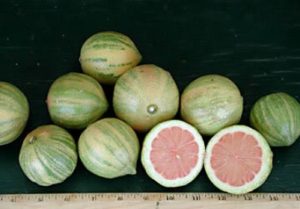 Pink lemons off the tree. (botanical-journeys-plant-guides.com)

The variegated pink lemon is not a hybrid but its own type. Freshly-picked the skin is striped green but as it matures, the peel goes traditional yellow while inside the flesh only intensifies its pinkness, colored by lycopene, the same natural compound that creates pink grapefruits.

Its juice is more fragrant and less acidic than regular lemons. Its most famous use is for Summertime Pink Lemonade, since its growing season run during the warm months.

Legend claims pink lemonade first appeared as a Civil War era treat at a circus, a vendor finding he was out of water and used a tightrope dancer’s water bin where her red tights were soaking. Yuch. Another tale claims a circus food vendor was making lemonade when a few red cinnamon candies fell into the batch and colored the drink. 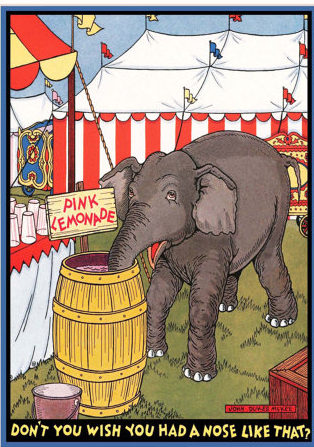 Both are untrue. The pink lemon was only first discovered growing on a tree in Burbank, California in 1930. You might find them in a farmer’s market or where California fruit is sold. Try some.

The big letdown? The pink lemon’s juice is barely tinged with the color.

Most people cheat with a drop of red food coloring, but my batch here has its hue from turbinado sugar’s brownish tint, just enough to amp the pink.

« All the Presidents’ Campaign Posters: Stars & Stripes Every Which Way
First Ladies Voting: An Illustrated History of the Right to Ballot »