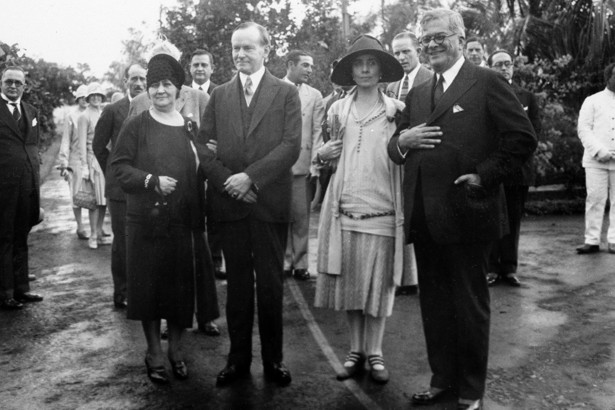 President Calvin Coolidge and First Lady Grace Coolidge (both standing at center) at the Havana estate of the Cuban President and First Lady General Gerardo Machado y Morales (far right) and his wife, Elvira Machado (far left). The Coolidges made the visit to Cuba to attend the Pan American Conference, January 19, 1928. (AP)

News this week that President Barack Obama intends to visit the communist island nation of Cuba before his term is over in just over eleven months from now, has prompted the media to hail the pending visit as the first by an incumbent U.S. President since one made by Calvin Coolidge in 1928. 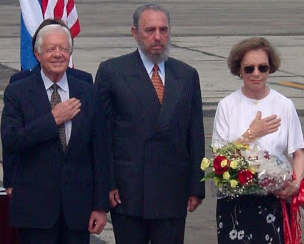 Among other news outlets, it was mistakenly announced on February 18, 2016 by Andrea Mitchell on her live on-air MSNBC news program. The Mitchell Report. During the broadcast, a rare image of “Silent Cal” and his wife Grace Coolidge was flashed on the screen.

The same day, an article in the online edition of The Atlantic Monthly magazine also stated the Coolidge visit as the only previous definitive visit by an incumbent President to Cuba, pointing out that a 2011 visit by Jimmy Carter took place when he was a former president and therefor didn’t quality in the rare historical precedence of the anticipated trip. 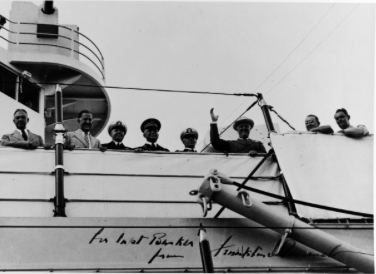 President Franklin Roosevelt aboard the U.S.S. Houston which he took for his first trip into Cuban waters.

Technically, this is untrue. In fact, not only Coolidge but also Franklin D. Roosevelt and Harry Truman visited the island of Cuba while they were serving as incumbent Presidents.

On February 20, 1939, President Franklin D. Roosevelt visited Guantánamo Bay in the USS Houston. He was back again a year and a half later, his naval ship, the USS Tuscaloosa, again entering Cuban waters but not touching foot on Cuban soil.

Not so on February 25, 1948, when, taking a day cruise away from his “Little White House” in Key West, Florida, FDR’s successor, set foot on Cuban soil. 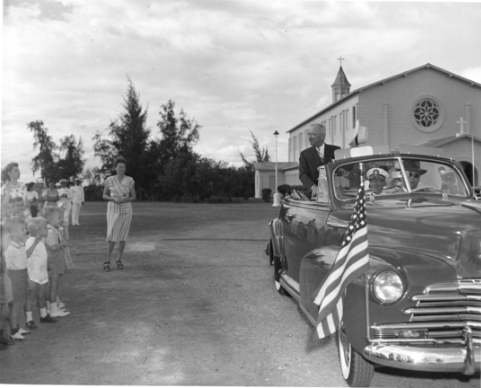 That day, President Harry S. Truman visited the U.S. Naval Base at Guantánamo, Cuba, touring the local headquarters of American naval men stationed there, waving back to children who lined up along the road from the dock to the base to greet him, taking in a band concert held in his honor.

President Truman kept his Cuban visit confined to the Guantanamo Bay Naval Base, technically a property of the United States within a foreign country. 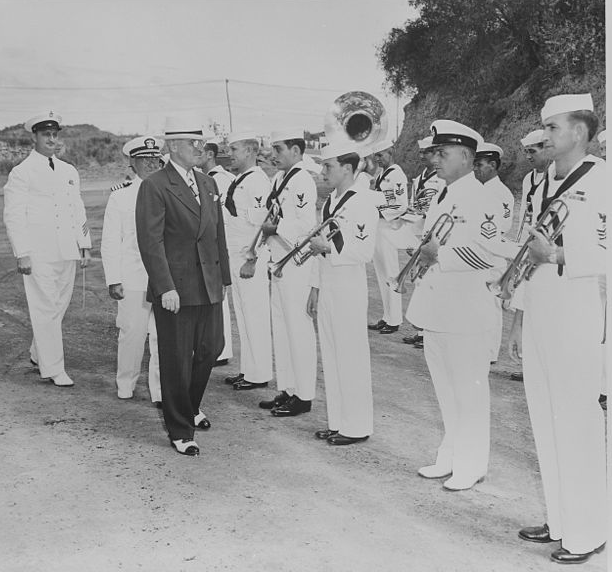 Truman greeting members of the U.S. naval base band in Cuba. (HSTL)

Arriving by the presidential yacht, the presidential party was driven to the Officers’ Club for a luncheon typical of the 1940s, as stated in the log, consisting of “consommé, filet mignon with mushrooms, baked Idaho potato, fresh broccoli with Hollandaise sauce, tossed green salad, ice cream and coffee.”

After lunch, a display of native Cuban products was brought out for the guests to chose a token of their visit, including leather goods, carved wooden items, perfume and, of course, cigars.

Following this, President Truman was given an open-air tour of the naval base, including a stop at the local school where children of navy personnel were taught.

Truman with aides just prior to their early 1948 visit to the Virgin Island, Puerto Rico and Cuba. (HSTL)

The span of Truman’s time on the Cuban island was only two hours. He was flown back to Key West from the Naval Air Station.

Further, he did not meet with Cuban officials, so the visit was not considered “official,” as had been true with the Coolidge visit.

The Coolidge visit had a number of colorful incidents during the two days and one night that they spent on the island. 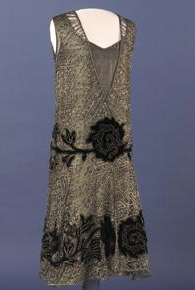 A silver gown in the Smithsonian collection that was worn by Grace Coolidge may be the one she wore to the state dinner in Cuba.

As the presidential couple was driven in an open car through Havana to the presidential palace, their path was literally strewn with roses. The First Lady was put up in a regal, pink-toned bedroom suite dubbed “The Marie Antoinette Room.”

A fan given to Mrs. Coolidge in Havana by the Cuban Ambassador to the U.S. (The Vermont Standard)

At that night’s formal state dinner, Mrs. Coolidge, wearing a dramatic silver gown with a green train, had a rough time of it, neither she nor her husband speaking Spanish and neither the Cuban President or his wife, Gerardo and Elvira Machado able to speak English.

After the two presidents delivered speeches in the Havana National Theater, the Coolidges were able to take in a game of jai alai, and tour through a sugar mill. At the country estate of the Machados, the American President and First Lady were treated to a lunch under a thatched pavilion. 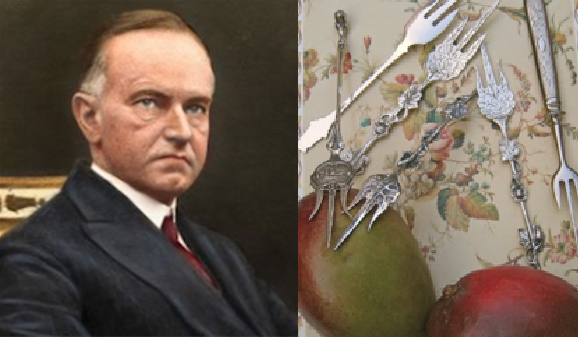 One certain accomplishment of Coolidge’s trip to Cuba was that the President learned how to properly use a mango fork.

The President also had some fun with a new kind of fruit. In a letter to friends, Grace Coolidge recalled her “better half with a mango firmly impaled on the tines of a spear made for the purpose, biting into its juicy interior, looking for all the world like a small boy caught at mischief.”

If Michelle Obama accompanies the President on the visit to Cuba, which is likely, she will become the fourth First Lady to do so. The wives of FDR and Truman were also there and, unusually, both Eleanor Roosevelt and Bess Truman went to Cuba as incumbent First Ladies without their husbands. 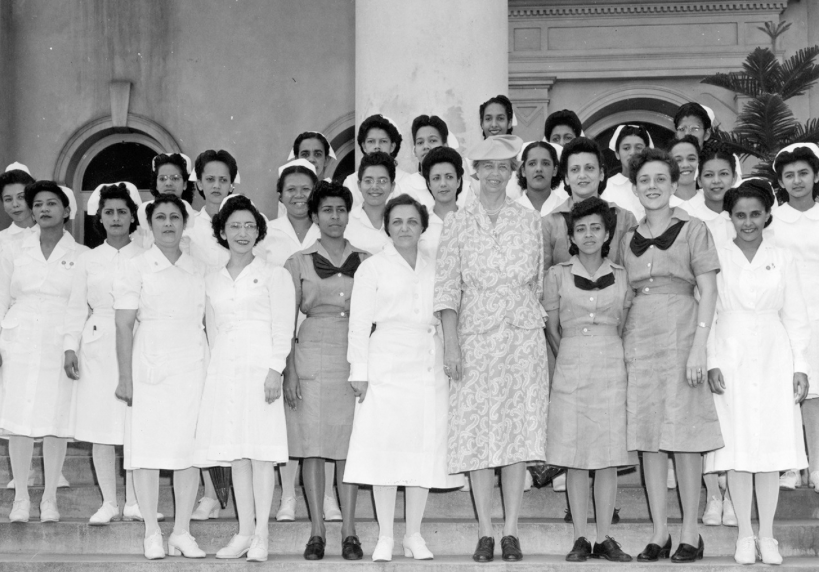 Eleanor Roosevelt visited Cuba during a whirlwind World War II mission to Caribbean and South and Central American nations. She is seen here with hospital workers in Panama. (FDRL)

In 1944, Eleanor Roosevelt became the first of two incumbent First Ladies to visit Cuba without a President. As the final of three overseas fact-finding missions during World War II, she was in the Caribbean and South America from March 4 to March 28, 1944 with an itinerary that included Guantánamo, Cuba, Jamaica, Puerto Rico, the Virgin Islands, Antigua, St. Lucia, Trinidad, Paramaribo, Belém, Natal and Recife in Brazil, La Guaira; Curaçao, Aruba, Barranquilla, the Canal Zone, Salinas, Galápagos Islands and ended the whirlwind plane trip with a second and third stop in Cuba, in Guatamala and then on to Havana. 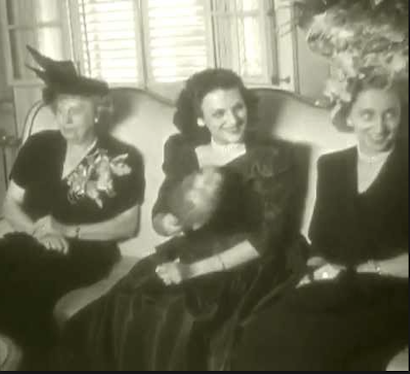 In the Cuban presidential palace, with the island nation’s First Lady between them, Bess Truman and Margaret Truman sit on a couch, posing for cameramen. (youtube)

Following the grueling 1948 presidential campaign which saw the surprise reelection of her husband, Bess Truman and her daughter Margaret left the President basking at his favorite tropical vacation White House, in Key West, Florida. The two women decided to cruise to Cuba on the presidential yacht Williamsburg.

There was a bit of shopping on the Prado, a leisurely tour of old Morro Castle and some clinking of champagne glasses with the First Lady of Cuba at the presidential palace.

Although she spoke Spanish well, having taken lessons during her first years in the White House, Mrs. Truman was too nervous about making a mistake and having it reported in the media.

Here is some silent news footage of the Truman women hooping it up in Havana: