Home › Hollywood › JFK, Joan Crawford & Why She was in Dallas When He was Shot

JFK, Joan Crawford & Why She was in Dallas When He was Shot 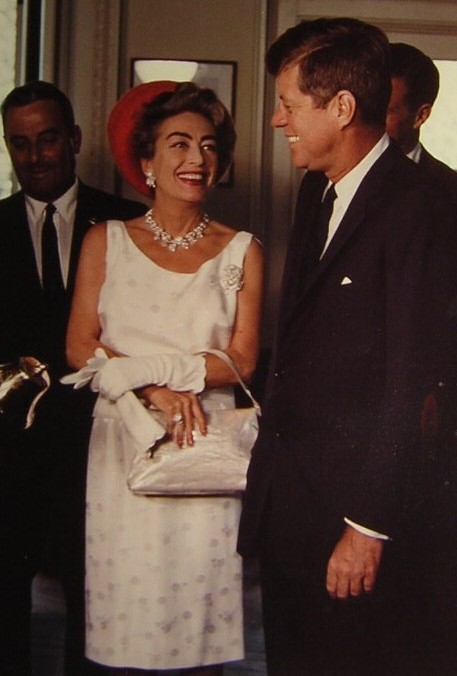 Joan Crawford laughing at a remark made by President Kennedy in the Oval Office, May 3, 1963. 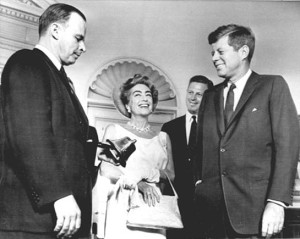 John F. Kennedy and Movie Star Joan Crawford, however, might have been the oddest coupling of a President and a Movie Star, not the least reason being that the latter was a rigorous, vigorous Republican who contributed heavily to the 1960 presidential campaign of his opponent, Richard Nixon.

It was their mutual support of complicated health problems which still plague the nation, however, which brought them together on more than one occasion, but most notably in the White House Oval Office on May 3, 1963.

Crawford and the senior Kennedy.

In 1931, she later recalled, Crawford was drawn to the “take-charge vitality” of his father, Ambassador Joseph P. Kennedy, when the older man was working in Hollywood.

Then married to “Hollywood royalty” Doug Fairbanks, Jr., however, Crawford decided to remain loyal to her illicit lover Clark Gable, rather than start an affair with Joe Kennedy as he hoped she would. 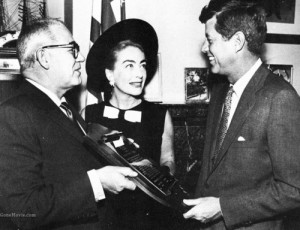 Joan Crawford met with John F. Kennedy on April 17, 1959, when she and husband Al Steele presented Kennedy with an award for his service to the National Multiple Sclerosis Society.

In 1945, when Joan Crawford first met his second son, John F. Kennedy, then in Hollywood, she was about to tell him about her thwarted assignation with his father. She then remembered Joe’s reputation for revenge against those gossiping about his private life – so she chose not to cross that line.

They met a second time fourteen years later, on April 17, 1959. By that time, Crawford was married to the chairman of Pepsi-Cola, Al Steele, and Jack Kennedy was serving as the U.S. Senator from Massachusetts. 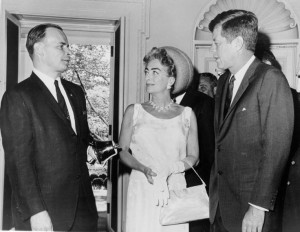 Frank Proctor, National Mental Health Association chairman of the board, Crawford and JFK.

He, along with the Steeles had been avid financial contributors to the earliest efforts to find a cure for multiple sclerosis, an effort which has continued over half-a-century since. The couple came to JFK’s Senate office to present the plaque recognizing his work for their mutual cause. 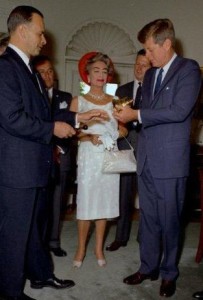 The eyes of the Actress never seemed to leave the face of the President.

Like Thomas Jefferson, John F. Kennedy had an adult sister who lived with a severe learning disability, one of the wide-ranging diagnoses categorized under “mental retardation.”

Along with his landmark signing and advocacy of the Mental Retardation and Community Mental Health Centers Construction Act of 1963, JFK helped to rapidly advance a better public grasp of not just organic brain disorders affecting functionality but also the far wider and virtually endemic range of mental health issues most American families discover among members at one point in their lives. 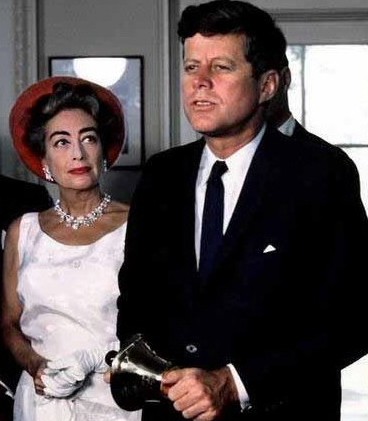 Joan Crawford in the Oval Office with President John F. Kennedy, May 3, 1963.

In recognition of JFK’s legislative and symbolic leadership, elected and honorary board members of the organization known as Mental Health America, came to present the President with a small replica of its “Bell of Hope.”

“I’d known Jack Kennedy for years, and that’s why I couldn’t imagine why my knees kept trembling when I approached his desk. It was the magnitude of his office, and the position he holds, I guess. But he had a gift for putting people at ease. There were several other people in the office, but he came around his desk and said ‘I want to see Joan.’”

Joan Crawford told this story to the Pepsi convention taking place in Dallas, Texas on November 22, 1963.  She had paused the proceedings when she and several Pepsi executives stepped briefly from the Baker Hotel, where the convention was being held, to watch the presidential motorcade go by.

Apparently, an invitation had been extended to both Joan Crawford and Richard Nixon from White House staff members to attend the scheduled luncheon speech that President Kennedy was to deliver at the Dallas Trade Mart. Without being overtly partisan, Crawford told a reporter, “No, I don’t think either of us will attend the luncheon here for President Kennedy,” she smiled. 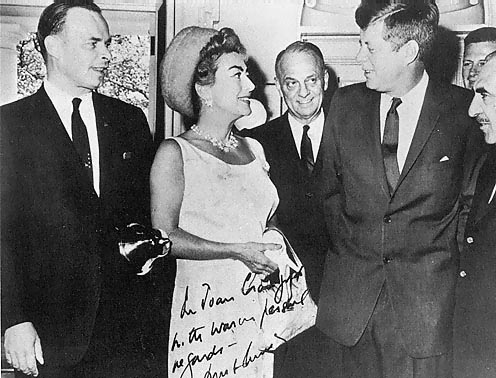 JFK signed a picture of them together for Crawford. (joancrawfordbest.com)

She then went up to her own suite in the hotel and there, in just a mater of minutes, she heard the first bulletin report that the President had been struck by bullets just several blocks from where she was then standing .”My first impression is that it was the crudest, dumbest of joke I ever heard,” she recalled.

Despite her famously soaring ego, Crawford was not above making a request for that ubiquitous of all souvenirs – the autographed picture. Once a black and white image was sent to her, via the Mental Health Association,  she enclosed it with a note to President Kennedy requesting his signature on it, received at the White House on July 8, 1963.

It was almost another entire three months before she received a response, but on October 4, 1963, Joan Crawford got her picture with the President signed by him. One month, two weeks and four days later they both went to Dallas – but only she returned., 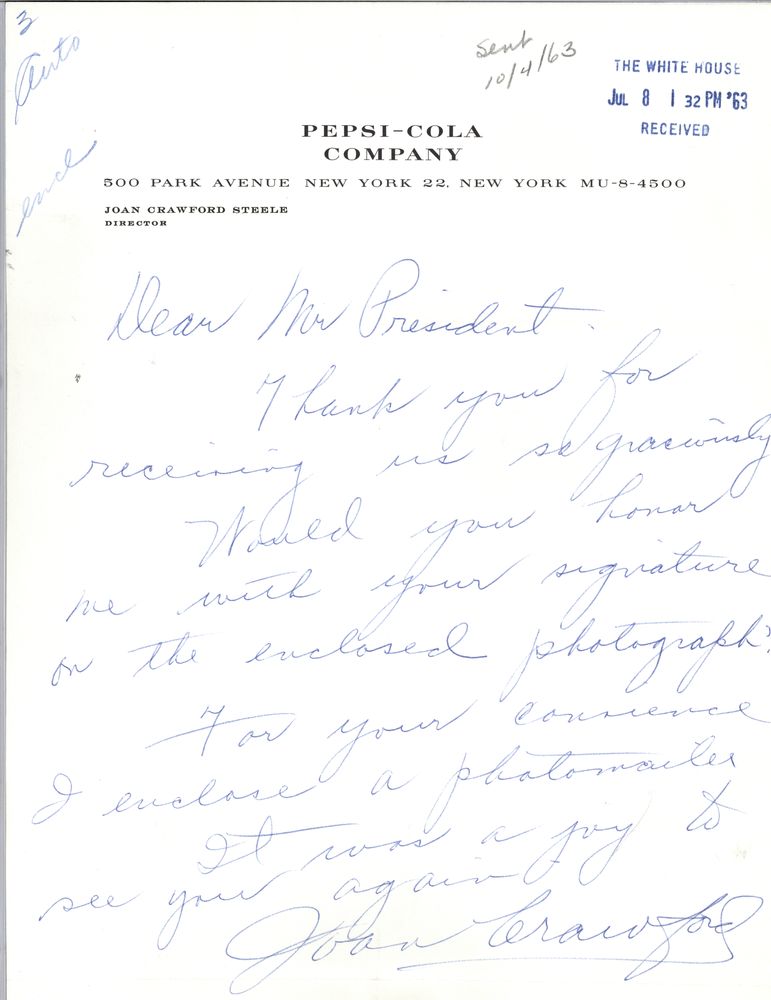 « Justin Bieber to Thomas Edison: Eight Celebrity Degrees of Separation
Joe Namath: The Happy Hipster who Made the Superbowl Happen »